Fox Villain is in Mortal Danger 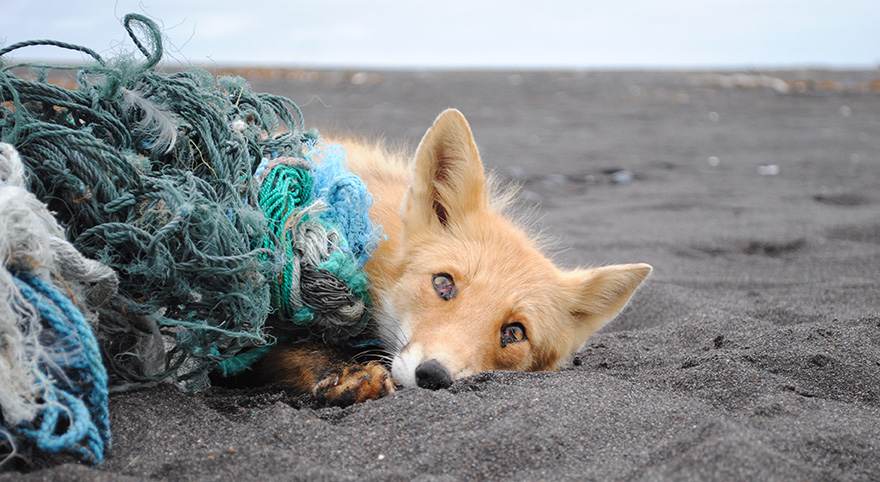 Troubles never come singly. Our Fox Villain is in danger…

The day before yesterday in the evening, I with my wife and two young sons walked along the shore of the ocean near the mouth Kronotskaya and stumbled upon a strange track, as if the fox was dragging a huge prey. We were on his trail, and after a hundred meters we saw a piece of fishing net, Fox was trapped there. At first I did not even recognize Villain, because he had lacklustre eyes. His muzzle was swollen, his eyes were dark because dry sand. He was trying to become free – he was struggling with the net, and the fox was very exhausted. He made the important thing to be saved – he beached the net, but he was way baked to do anything else: a thin nylon cord tightly winded the fox ‘s neck round.

Miraculously, the fox were not caught by bears: there were many these beasts of prey in this area.

We tried to help Fox – we cut the rope around his neck. But at first Fox could not move at all. He was without any motions for some time and then tried to crawl to the river to drink fresh water. He took a sip of water but he vomited water, but he became easier. Suddenly, we saw a bear – it was coming to us. This fact worried the helpless fox much, because he could not move. We wanted to avoid meeting the bear, and our Fox too.

We frightened the bear away having fired a signal shot. We were guarding our red friend for two hours till dusk. But we could not stay with him any more, because we needed to boat home to the cordon, it was a long distance – about 15 km up river, and at night it was tough to do indeed. We headed to the boat, our poor Fox was looking at us. He tried to get up and go after us. At last he managed to crawl away into thick grass.
In the morning I was back, half a day I was looking for my red friend, but in vain. I had to go back home. Not only my family worried about the fox, but researchers of the park too.

In the evening I was looking for the fox again and just alighted on him. Fox found his shelter not far from the place where we found him yesterday. He crawled to me, he was very weak, it was clear that he was suffering much.

This national park is one of the wildest and most inaccessible place of the world, and change, constant change, is the law of organic life here.

However, even here the nature is suffering from the presence of human beings. Unfortunately environmental pollution is a great problem on our planet at present.

During my long walks I’m always trying to clean the beach from nets, robes and other human garbage! But it is just a tiny part of that!!

Everyone knows how many marine animals are trapped in nets on the high seas. But it turns out the networks kill animals not only in the open sea.

Our planet: cities and villages, rivers and seas –is full of different garbage. It is being polluted a lot. Not only human beings Suffer from that, nature as well as our pets, wild animals are suffering. People must learn not to litter on their planet, in fact it is not so difficult to do. People must scavenge. It should be some kind of scavenger hunt in our society. We should explain people that environmental pollution is a great problem in our world indeed. 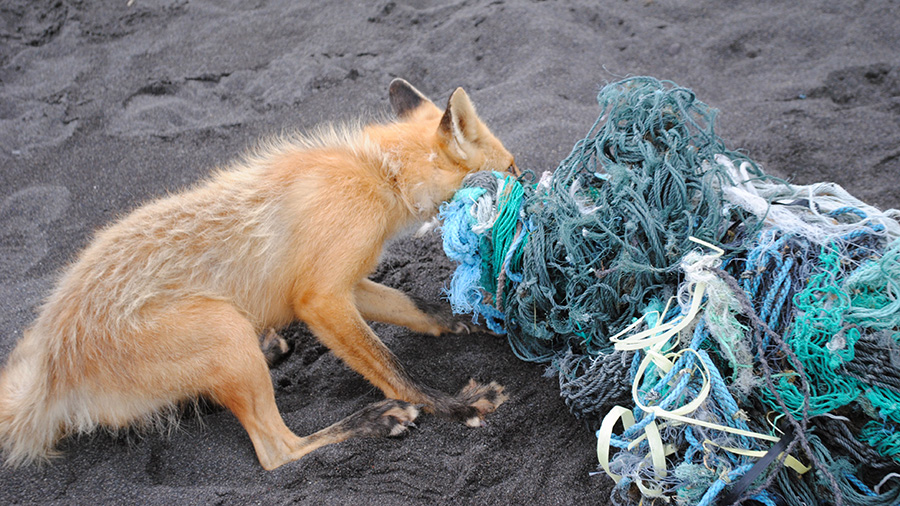 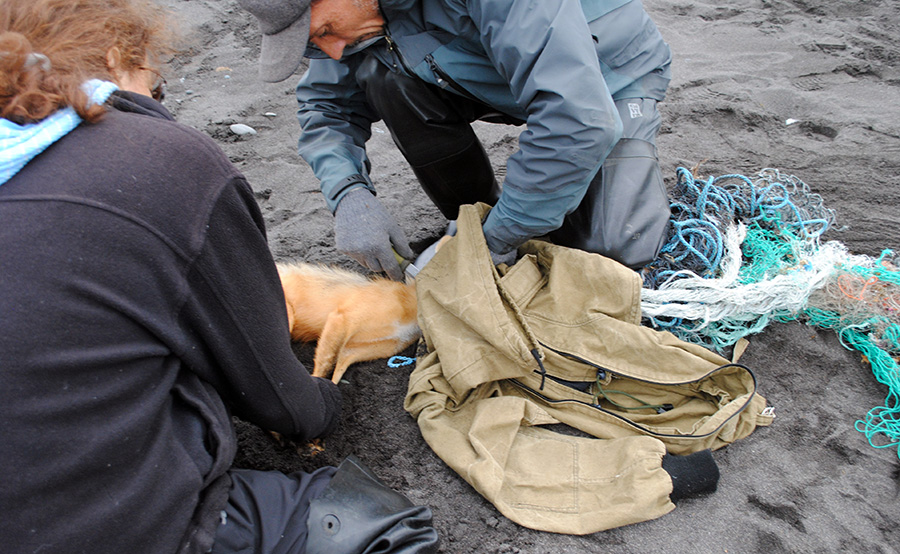 I think some readers of the story can think that we could try to save the fox – and we were trying indeed. But Fox was very weak he could not eat and drink at all – he was hardly moving.

As for vet help – take a look at the map of that area! The nearest road is 100 kilometers far from that place and you are able to reach the place only on foot not by car. Believe, this way takes more than a week. But what about a helicopter or a plane you can ask? – The flight from Petropavlovsk here costs about 400 thousand rubles about 10.000 euros, those days there was non-flying weather at all. I think in this weather even a human being could be in danger.

I could have moved the fox somewhere in a shed – but for what? – He was suffeing torments and my actions only would have stressed him much in addition.

I had not special vet help. It was better for him to give Fox a chance to die in the place where he was born. But I was guarding him from bears and other beasts of prey believing in miracle but alas……

Today at dawn, when I was back to visit my red friend I saw that my Fox was more dead than alive. At nine in the morning he died, my Villain was gone…

The vixen is bringing up her 9 cubs along now. Well-fed grown cubs are having fun a lot with fish instead of toys. A lot of food they have: much pink salmon indeed. This fact means that bears, sea-eagles and other animals will not be hungry at all.