The Bad News from the Estuary 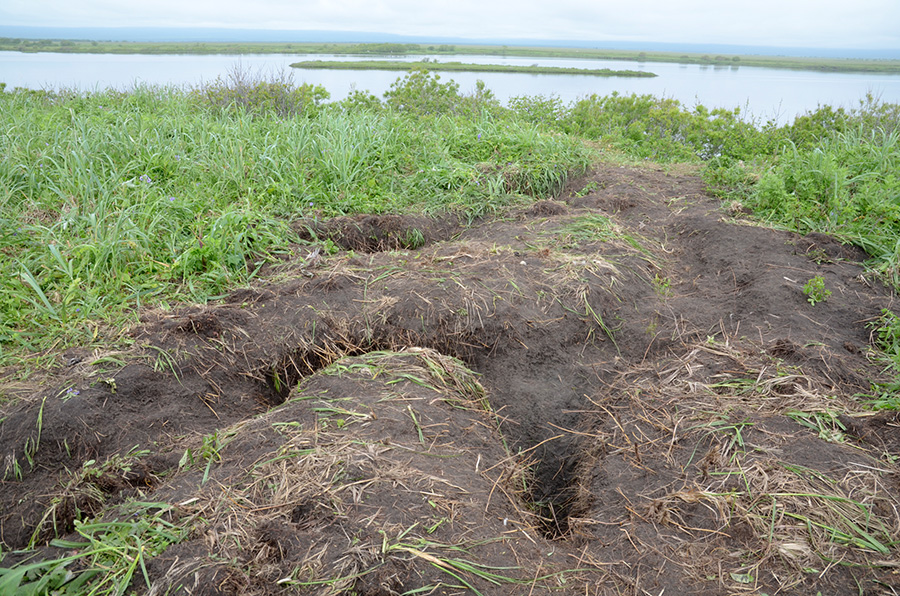 Estuary is a part of the mouth or lower course of a river in which the river’s current meets the sea’s tide.

More than for a week I couldn’t come up to Villain’s family (fox family): the holes were hidden with high grass, I couldn’t see foxes, and were taking pictures of them.

I couldn’t find the foxes. But they were facing a problem: the bear destroyed the foxes’ hole. The six fox cubs and Villain (vixen) could escape (the hole had 4 branches), they found their refuge in another hole, it was located not far from the former one. I didn’t see Villain (dog fox) for a long time indeed. I was very disturbed.

Pink salmon shoals attracted a dozen bears here. There are lots of fish in water but it is very tough for bears to get salmon. There was too much water in the river and estuary. The Bears were hungry. Suppose bears wanted to find something in Villain’s hole to have a snack. But not only the fox hole was destroyed by bears, a wooden hut – which was built not far from the foxes’ home – was destroyed as well. 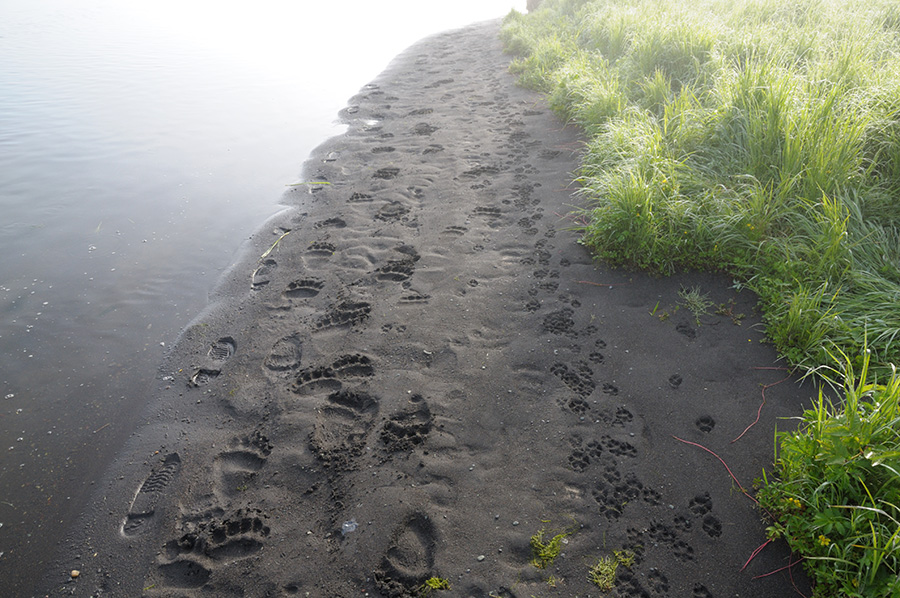 The riverside looks like a three-lane road: each line for each kind of animal 🙂

At dawn I got the estuary. There was a fog, I could hear bears’ growling, the sounds of bears’ pacing in shallow water. I saw at once that the new shelter of foxes was also destroyed. The hole was empty. I came back to the former hole and I noticed fox tracks. More than four hours I was waiting, but I could see only one tiny fox cub.

At ten a.m. there was no any fog already, at a distance I could see volcanoes covered with snow. But the beauty of nature did not touch me – I was not happy – I wanted to find foxes. I got back, not hoping for the best.

But I could stay at home… I wanted to see the foxes. I wanted to moor my boat not far from the former foxes’ hole, but suddenly among willow bushes I saw him – my Chief Fox –Villain (a dog–fox)! The fox looked unhappy, he was dirty – in mud. But what a surprise. After a few minutes, I came up to a new hole, it was in the roots of a tree. It is possible that foxes could find a new home – they deepened and renovated a vacant hole of otters. I could see that the fox family again shared both holes. I went home, not to bother the foxes . When I was coming down the river I saw Villain (a vixen), She had a large hunchback salmon. The fate of fox cubs is unknown, but it is a Happy end in any case!

Fox Villain is in mortal danger